When you’re down in the dumps, sitting up straighter may lift your spirits.

People with depression often slouch, their droopy shoulders mirroring their down mood. So what happens if they simply sit up straighter? They may feel more upbeat and less fatigued, says a new study from the University of Auckland. The study is slated for publication in the March 2017 issue of the Journal of Behavior Therapy and Experimental Psychiatry.

Previous research had focused on the link between posture and mood in healthy populations, says Elizabeth Broadbent, Ph.D., one of the authors of the new study. Broadbent is an associate professor of health psychology at the University of Auckland.

But would a simple change in posture have any impact on people with depression? That’s what Broadbent and her colleagues set out to investigate.

How the research was conducted

The study included 61 participants who were identified as having mild to moderate depression on a screening test. The group as a whole was more likely to sit with stooped shoulders and a rounded back, compared to norms for people without depression.

While sitting this way, the participants took part in a task that’s widely used to elicit stress. It involved giving a five-minute speech, which they were told would be judged, and then counting backward from 1,022 in steps of 13. At various points during the study, participants also filled out questionnaires measuring their mood symptoms.

Benefits for people with depression

The results: “In our study, asking individuals with mild to moderate depression to sit upright reduced their fatigue and increased their enthusiasm over a short time period, compared to individuals who sat in their usual posture,” says Broadbent.

“In addition,” Broadbent says, “participants sitting upright spoke more words in total during the stressful speech task, but reduced how much they used first-person singular pronouns (such as “me” and “I”). This suggests that they had more energy, had less negative mood, and were less self-focused”— changes consistent with easing of depressive symptoms.article continues after advertisement

When your mood is in a slump

If you have depression that’s causing serious distress and interfering with your daily life, good posture is no substitute for professional treatment. But as an addition to treatment, occasionally reminding yourself to sit or stand up straight might help you feel more upbeat and energetic. Thus far, there’s only limited evidence to support this approach, but there’s also very little risk in trying it.

In any case, improving slouchy posture may have other health benefits. Poor posture can lead to backaches, neck and shoulder pain and headaches. A Chiropractic Clinic in Guildford offers Postural Correction, Massage Therapy and Osteopathy in Esher, Surrey to combat the detrimental effect of poor posture and depression.

If you don’t have depression but are just feeling a little blue, multiple studies suggest that improving droopy posture may give your mood a pick-me-up. “The reason I got into this area was that one day I was walking along, feeling a bit sad after a bad day,” says Broadbent. “I noticed that I was walking with my shoulders slumped and looking at the ground. I looked up and put my shoulders back, and immediately I felt much better.”

Broadbent adds, “I hypothesized that, if this worked for me, it might work for other people, too. That is what got me started on this research pathway. From my own experience and from my research, I think adopting an upright posture can help people feel better. But I think much depends on context and situation, and more research is needed into when [this strategy] works and for whom.” 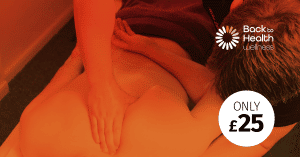 At Back to Health Wellness Guildford Chiropractor Clinic we use cookies to offer the best online experience.